According to recent research from Gartner there’s an uprising of pragmatism amongst the blockchain experiments that are in progress. While some were on the outlook for massive disruption most other companies attempted to use blockchain technology to solve urgent business issues. Not all of them were successful, eliminating third parties to increase efficiency is proving to be more difficult than just slotting in technology into an ecosystem. Fortunately, more and more mature blockchain projects start to see the light of day and organizations are willing to share their insights. We evaluated 10 projects in the agricultural and food sector that showcase the possibilities of applying blockchain technology and can help you to design better solutions, from top-down disruptors to bottom-up improvers and from provable successes to preventable failures.

“Fairfood wants our food chains to be more transparent, so we can guarantee the people behind our food earn a living wage” is displayed prominently on their web site. Their mission is based on a study in collaboration with the University of Wageningen that can be downloaded. In their study they focus on transparency and the possibility of Supply Chain Finance and they’re trying to put their findings into practice with Moyee Coffee and Verstegen.

Moyee Coffee started an experiment in 2018 with coffee farmers in Ethiopia and announced in December 2018 that they would continue the experiment. They are handing out a token (worth € 0,50) with every purchase that can be spent, or claimed, by customers. Their research showed that half of the buyers donated the token to the coffee farmers. The tokens are paid out of the marketing budget of Moyee coffee and showcases new ways of engaging customers.

Verstegen focused on using blockchain to map out the journey of nutmeg from farmer to consumer. Their solution was introduced in December 2018 and you can claim and follow your nutmeg. While the platform is still active there are no new transactions posted since 2018, casting doubt on the success of their experiment. While the project is successful from a technical perspective the question remains if, and how many, consumers are interested in tracing the origins of the goods they purchase.

Albert Heijn is actively experimenting with blockchain technology. Last year they made it possible to trace the origins of oranges and applied the technology to improve the efficiency of their logistics operations. Their orange traceability solution received negative press from Dutch Newspaper Trouw as the conditions of the farmers left much to be desired and this wasn’t visible for users of the solution. Since April they launched a new initiative, again in collaboration with SIM, to trace the origins of eggs. By typing in a code on the AH website buyers can see the entire history of an egg. AH announced an ambition to make all of their fresh foods supply chains fully transparent by 2025. Given their continued experiments with blockchain and the expansion of participants it is expected AH will use this technology in their supply chain solution. SIM is also involved in other blockchain experiments such as the traceability of Fairtrade bananas from Columbia together with Plus supermarkets.

The collaboration between Carrefour and Nestlé was announced in April 2019 and implied that the origins of one Nestlé product (Mousline purée) would be made transparent using the Food Trust network developed by IBM. IBM has gone all-in on blockchain and this announcement bears great similarities with other announcements such as the example from Walmart about lettuce. IBM’s Food Trust solution is presented on their website as a fully developed ecosystem but the announcements indicate that IBM is still tweaking the solution as participants only use the Food Trust network for one or two products. Nevertheless, it’s interesting to see how this solution continues to evolve as some of the largest retailers are testing it. The solution runs on a private blockchain which means that it does not offer full transparency directly to end customers or other stakeholders.

In June 2018 Belfruco, Enzofruit and startup T-Mining announced their initiative to improve the efficiencies of their logistical operation. Replacing the endless stream of (sometimes still paper) documents is a popular use case for blockchain technology but requires the collaboration of many parties. T-Mining succeeded in bringing all relevant parties together, including the Port of Antwerp and received new investments from Taste Invest and PMV in April 2019. While these investment secure further developments of the T-Mining platform its unclear what the results of the 2018 experiment were as no new announcements were made.

The one-liner “Bumble Bee Foods is using blockchain technology to trace yellowfin tuna from the time it’s caught to the moment it hits store shelves.” speaks for itself. They announced they would use Multichain running on the SAP cloud platform which is a noteworthy technology choice. There is no specific need to run Multichain on SAP as it can run on-premise, with Azure or AWS but we see more openness where companies like SAP support customers who want to experiment with new applications that can’t be dominated by one global player. Supporting multiple blockchain platforms will become as common as supporting multiple API standards such as SOAP or REST. As there are no global standards on how to exchange (tuna) data on a blockchain these solutions are still proprietary. Past tuna blockchain projects like the one from Provenance in 2016 (recommended read!) and the one demonstrated by Viant in 2018 show ongoing interest in this application but since each project used a different technology stack it will take a while before a standard will emerge.

It’s coffee again, this time it’s big names Starbucks and Microsoft joining forces in 2019 to explore the benefits of using blockchain technology for digital traceability to support their sustainability strategy. While not the first to market, the proposed integration with their mobile application will undoubtedly result in a seamless user experience to trace your cup of coffee back to its roots. It’ll be interested to see how they will deal with the challenge of tracing the first and last mile: How do you know which batch of coffee was actually grinded to brew your refreshment? And how much detail will be requested by the customer?

In this blockchain pilot, announced in March 2019, The National Pork Board and Ripe Technology want “to enable an ecosystem that will allow pork producers to monitor, evaluate and continuously improve their sustainability practices based on the We Care framework”. While the framework itself is not new (it dates from 2008) the level of transparency that blockchain can deliver will result in something different. The pilot will use blockchain to store proof points that can benchmark performance as well as increase transparency. As most projects boast about transparency it’s interesting to see that the National Pork Board also wants to benchmark performance. Blockchain can provide reliable and relevant data to pork producers without sharing competitively sensitive information.

This pilot, announced in July, 2018, is focused on reducing fraud as counterfeit mangos are stamped with the Cat Chu brand, mixing the premium brand with copycats of unknown origins. The pilot is developed in collaboration with IBL and was dubbed the “FruitChain” project, a traceability solution for the agricultural market in Vietnam. The project resulted in a solution called WowTrace that, in addition to QR, also supports NFC and RFID for the unique identification of a mango. As the benefits of blockchain start to become more known we’re likely to see more local players with extensive knowledge of their own market carving out a decent market share from the global initiatives. This will in turn increase the need for standardization and streamlined communication between blockchains.

Another benefit of tracking fruits on a blockchain is explored by Sunmoon. While their project started like most others with a QR code to track Chinese Fuji apples they expressed an intention to offer new financing opportunities. They will attempt to reduce the supply chain cycle from 60-90 days to 24 hours and reduce intra-communication and inter-communication costs. If successful, they will expand their method to include tracing frozen durians, avocados, citrus fruits, and more. Again, local expertise is key. In March 2019 their CEO gave an interview and shared that they work on a pay-as-you-go basis with DiMuto and extended the pilot to durians as intended. This last fact alone makes this project stand out as most blockchain projects fail to realize their planning or ambitions.

Underlining the financing opportunities unlocked by blockchain is also done by GrainChain who announced their platform for Honduran Coffee farmers this September. By tracking the coffee beans they are able to build stronger trust for the banks who in turn loan more with less risk. While their website does not yet mention any details about the solution the press release illustrates how the solution differentiates from existing projects like the one executed by StarBucks. By cutting out middle men whose opinion can influence the price farmers receive for their beans, banks can be more sure that farmers receive the funds necessary to pay back their loans. AB InBev is doing something similar as announced in 2019 as well with the BanQu platform that provides an economic identity for un(der)banked individuals to make them a part of the financial system and lift them out of poverty.

These next generation platforms where track and trace, quality and funding are deeply integrated through one technology stack will deliver new revenue models that can’t be realized with today’s technology. This opportunity of scale makes these projects, although at the bottom of this list, perhaps the most interesting ones to look out for.

For these 10 projects that are on their way to success there are many more that are plagued by typical startup challenges. One challenge that all these projects face is a lack of standardization which makes interoperability costly or require fallback to outdated (paper) processes. It’s worth noting that GS1 announced their intention to leverage their existing standards to meet supply chain applications built on blockchain technology. While initially focused on enabling enterprise applications such as Food Trust these standards will trickle through to smaller projects eventually, enabling a true global supply chain that so many project founders are dreaming of.

If you’re curious to learn more about applying blockchain technology we recommend the following sources:

If you want to get started with blockchain technology please get in touch with us. 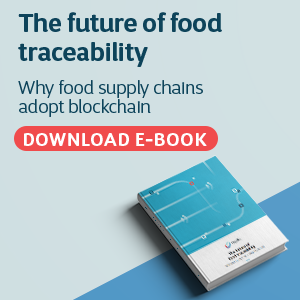 Bringing private blockchains to the public

Take operational excellence to the next level? Unlock the supply chain!

Operational excellence in the food industry means at least two things: managing cost on the one hand, managing margins on the other. In times of global competition, long-term contracts and raw material price fluctuation, that’s quite the challenge. The key to amping up operational excellence? Expanding the scope from ‘within these walls’ to ‘end-to-end.’

Compliance is slowing food companies down

Compliance is growing in complexity, especially for global manufacturers and distributors. In addition to legislative compliance requirements – which differ per country – and a whole range of certificates, there’s also an enitre set of (country-specific) standards by the retail industry that food businesses must comply with. Standards which are often more stringent than the legal framework.