IT is likely the most dynamic sector from both economical and scientific worlds. The need for technology services and products continued to grow even in the challenging year 2020, while other domains suffered a lot (transportation, arts, entertainment, accommodation, food services, etc).

Sales of IT services and products had a steady growth in past decades, while technology also evolved. New products were and are being developed. One of these modern IT products is iPaaS.

First of all, what is iPaaS? Apart from being a fancy marketing buzzword, it is a great step forward within Application Integration area. According to the definition given by Gartner, Integration Platform as a Service (iPaaS) is a suite of cloud services enabling development, execution and governance of integration flows connecting any combination of on premises and cloud-based processes, services, applications and data within individual or across multiple organizations.

Historically speaking, iPaaS term appeared at late 2000’s. Some sources say Gartner defined iPaaS in the market, while other sources claim that Boomi, an US based company now owned by Dell, launched the first iPaaS in 2008. Worth mentioning that during the 12 years history of iPaaS, Gartner remained the main research and analysis organization, within Integration Services. Gartner launched its first Integration focused Magic Quadrants study in 2009.

So we just defined iPaaS. Now let us see what business needs are solved by iPaaS. There are some classical use cases, which generally involve marketing, sales, and finance processes:

At beginning of this article, we mentioned iPaaS as a modern IT service. But why is it modern? Let’s start with the beginning = the founding brick of iPaaS is an integration flow.

The application integration workflows evolved within time. In late 1980, many companies had already applications that needed to be directly integrated with other applications within their organization or within 3rd parties. But these were point-to-point connections that eventually made the IT landscape of companies look like a so-called spaghetti environment. 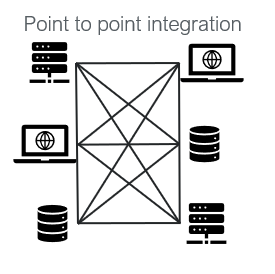 Then, in the late 1990s, the need of integration increased again. ERPs (Oracle, SAP, etc) implementations were exploding, CRM applications began to appear (Salesforce, etc) all over Europe and US, therefore IT started offering ESBs (Enterprise Service Bus), to support SOA (Service Oriented Architecture). But ESB was still a heavyweight architecture lacking agility.

Finally, in late 2000s, iPaaS was launched, as an agile version of the previous Service Bus or so-called Middleware applications. iPaaS deliver same functionalities, but as a hosted cloud service. It is obviously the best choice for organizations that want to outsource integrations, while resting assured that cloud offers scalability needed for IT and business needs.

Basically, iPaaS connects applications that are to be found on-premise or/and in the cloud.

*The last scenario above actually clarifies one of the myths linked iPaaS: no, iPaaS doesn’t only work with cloud apps!

That’s all for this episode. In the next one, we’ll be talking about how exactly iPaaS works. Read now "How iPaaS works?"

Powering the future of banking with custom software

Discover more about Cegeka Academy in a new article in collaboration with Ziarul Financiar.

Discover the latest industry trends and challenges that will impact businesses over the next few years. Learn about new technologies and approaches that can help you stay competitive in a rapidly changing marketplace.