Cegeka Romania, the local division of the same-named Belgian-born IT group, has now grown to a team of 830 people, with the total number of employees increasing by more than 100 since the beginning of the year, as the business expanded in 2022, with the company adding eight new clients to its portfolio.

Currently, the local division has a total of 75 positions open in Romania and is making final preparations for Cegeka Academy 2023, from where the company manages to recruit students year after year.

An important project in attracting candidates for open positions within the company is the Cegeka Academy, an educational program aimed at students in their final years or master's degrees from technical faculties.

This year, the Cegeka Academy, which was established locally in 2019, took place in the spring, with 19 students among those enrolled being hired by the company at the end of the program. As a result, about 20% of Cegeka's new employees, for the local division, have come from the academy since the beginning of the year.

"We accepted 50 students after the interviews, and 13 of them opted out halfway through the program. 37 students remained in the program, and by the end of the Academy, we had recruited 19 students who began working on our clients' projects right away. Cegeka Romania provides the younger generation with a fast-paced and entrepreneurial learning and working environment, as well as access to varied local and international technologies, industries, and projects”, he pointed out.

Cegeka Academy courses mix theory and practice, allowing students to work directly on the company's IT projects at the end of the program.

The Cegeka Academy this year covered three technologies—Java,.NET, and Frontend—over the course of 12 weeks. The students had access to HR information, a smooth hiring procedure, and career support in addition to the theoretical and technical expertise they learned from their mentors, Cegeka programmers.

The Cegeka team in charge of the student educational program has already begun planning for next year's edition, with the goal of having double the number of students enrolled compared to 2022, with 50 remaining to work in the company. 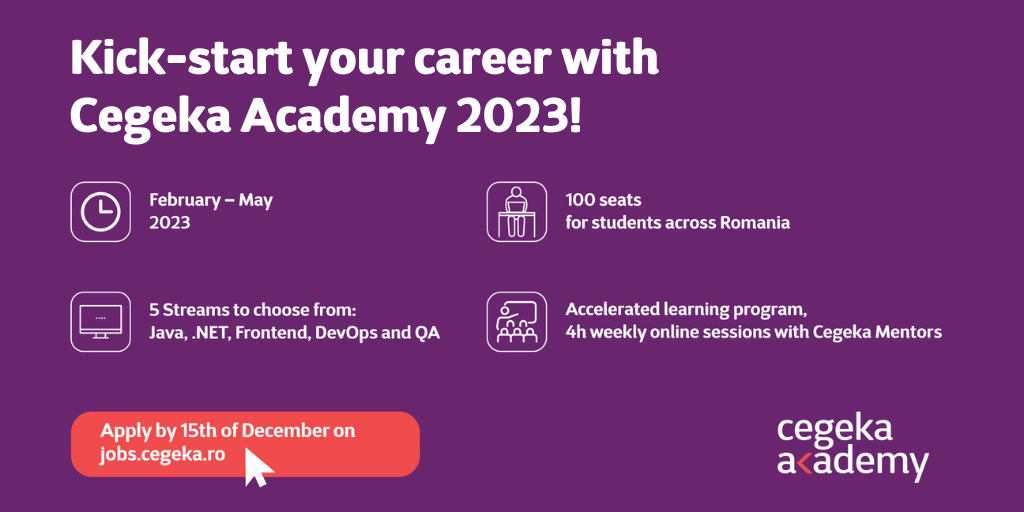 "Because we want to have 100 students enrolled in the Academy for 2023, we have already started preparations. We aim to have interviews with all the students in December, and from January 2023, we will already have the final list of those who will enter the Academy. We estimate the start in February, and we will have Java, .Net, DevOps, Frontend and QA as streams in the Cegeka Academy as we want to hire 50 students after the completion of the Academy who will immediately start working on customer projects", said Ovidiu Pinghioiu, adding that in December, the company will focus exclusively on organizing and interviewing students.

But how will the Cegeka Academy be organized in 2023? "Mentors will present students with technical concepts each week, followed by problems or exercises to help them understand the theory. The difficulty gradually increases as students progress through the program. Then, in the final month of the academy, they will be divided into teams, each team tasked with completing a project. This project aims both to apply and deepen the concepts learned so far in the academy, and to develop social skills, such as peer interaction, team communication, priority setting, and problem-solving," he explained.

Cegeka Academy is an initiative of the local division of the Belgian IT group, and so far three editions have been held from 2019 to date, with the program not being supported in 2020, the first year of the pandemic.

"If we look at all the editions that have been held since 2019, in all three years of the Academy's existence, out of 100 students enrolled, we currently have 35 employees. Therefore, 15% of the active employees in the local division come from the Cegeka Academy”, mentioned Ovidiu Pinghioiu.

Powering the future of banking with custom software

Discover the latest industry trends and challenges that will impact businesses over the next few years. Learn about new technologies and approaches that can help you stay competitive in a rapidly changing marketplace.

The 4th edition of Cegeka Academy is ON! Students across Romania can apply now for one of the 5 streams: Java, .NET, Frontend, DevOps, or QA.