The Lean way and the one-button test.

Have you ever had an idea of a great product that would translate into an amazing website or a stunning mobile app, but you kept it inside your head for months or even years because you didn’t have time or resources to create a prototype to validate it? Then you should definitely try the Lean way and this one-button test that can tell you in a matter of days whether people are interested in your idea or not.

Lean became really popular in software development with Eric Ries’s book, The Lean startup, where he emphasizes the role of eliminating waste and the Build - Measure - Learn loop.

Lean’s first two principles are: remove as much waste as possible and as fast as possible; and to amplify/enhance learning through experiments.

Author Eric Ries explains that it’s not as bad to put (even inefficient) work in an app that is desired by users, as it is to work efficiently and invest lots of time and resources in a product that in the end, nobody wants to use or worse, nobody needs.

Eric Ries also describes in his book his own experience of how he invested a lot of time and resources in his product, to ultimately face the reality that nobody wanted to try it.

Having learned this lesson the hard way, Eric goes on by explaining this idea of a landing page test. If he had just created a page with a single button and checked that nobody was actually clicking on that button than he could have saved himself the last 6 months of hard work. The button could be titled “I’m interested” “Keep me posted”, “Count me in”, “Login”, “Subscribe”, or however one sees fit, just to take the pulse of the intended audience and see if anyone is interested in the service offered.

A good example of a landing page test is DoorDash, a company founded in California, that started in 2013 with just the homepage. They wanted to validate if the delivery problem is such a big issue for small restaurants.

Having this in mind, they added a phone number on their website and some menus in PDF format from small restaurants. They wanted to check if someone is willing to call them and ask for food delivery. And on the first day, just one person called them. The founders drove to the restaurant, bought the food and delivered it to the person. They wanted to learn how the process works. 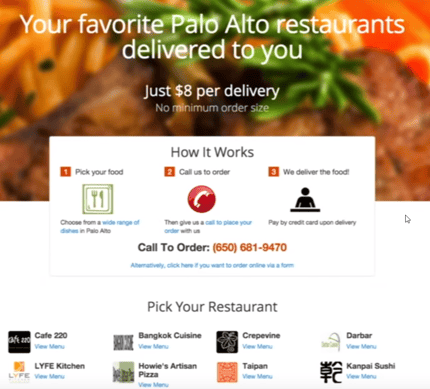 You can find out more in the presentation held at Stanford University by their co-founder, Stanley Tang, on how they started with this one landing page (link to presentation on Youtube).

In February 2019, they have raised over $1.4 billion and their total value reached $7.1 billion. And when you think that everything started with just a static webpage.

My personal experience with the Lean way

In addition to being a full-time engineer with Cegeka Romania, I explore various app ideas in my spare time. During the Innovation Labs hackathon (March 2019), my co-founder and I wanted to use the Lean methodology to find out if people were interested in our idea.

Our idea was initially named Meaningful Relationships. We discussed a lot about how Tinder creates superficial connections and how people are complaining that they cannot find someone with similar interests to form deeper connections.

We thought we could do better than that. We have a lot of data stored about us on social media accounts (our likes, posts, comments, etc.). Why not use all of that data for a good purpose? We could use your likes to create meaningful connections based on the same values and sense of humor you have. So we thought that if someone gives us access to their social media account, we can determine what kind of values and sense of humor that person has. With the data collected, we could match Alice with Bob because they have similar interests and are in the same region. 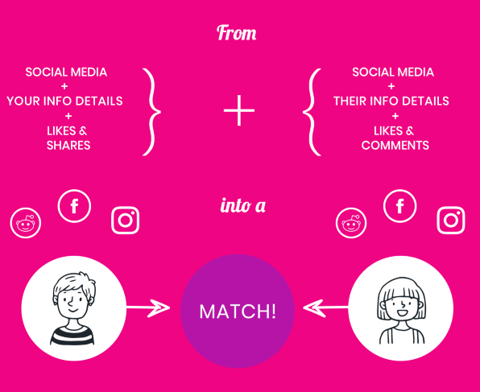 We thought it was a great idea and wanted to test it as quickly as possible, to see if people are interested in it and if they are willing to give us their data. (Alas, after the Cambridge Analytica data scandal, it was a big leap of faith and we needed to make sure people were on board, so validating our assumptions was a must.)

On the first day, we bought a cheap domain for less than 3 euros and then created a landing page with some images that were explaining the entire process.

The page also focused on the idea that you are willing to “Login” with your Facebook account and give us your data for us to match you with a like-minded person. Big ask I know. However, we were not actually collecting the data. We wanted to eliminate as much waste as possible. Because, if nobody is willing to press that “Login with Facebook” button, then the entire infrastructure and software are just wasted.

So, if someone clicked the button, a popup would appear, telling them that it was not available in their region yet, but that they could leave us their email and we would contact them once we launched in their location.

And we have also added some simple code that was able to measure how many people visited the page, how many clicked on the login button and how many were willing to give us their email address.

The website had only one page and it was ready in a day. And the last step we took was to create some ads on Facebook to attract traffic to our page. We have invested the extraordinary amount of just 2.5 euros (there is no typo, it’s two euros and a half) in ads. Eric Ries invested just $5 in Google Ads for his experiments.

For that amount, we were able to attract around 2.000 views that included people who were between the ages of 18 - 35 years old and in a specific city.

And now comes the most interesting part: the data. And mainly, what happened with those 2.000 views.

From 2.000 views, 20 people actually arrived on/visited the website. And from those 20 people, 7 actually were willing to give us their data in order for us to find them a like-minded person.

From those 7 people who clicked on the Login button and received the message saying that the app it’s not yet available in their region, 3 of them gave us their email addresses. And those are the most important users. Because they were willing to do the extra effort of typing in their personal email address. Because the service we promise to offer is important to them, it brings value to their life. Those are your early adopters that will tell their friends about this great app and spread the word around.

We were then able to wholeheartedly say that people are interested in the idea and that more experiments could be conducted. Also, we had gathered some data and allowed us to predict how much it will cost us to get onboard new users and how many of them will be our early adopters.

From our estimations we wanted at least 100 users to be our early adopters in a specific city to create the MVP, therefore we conducted that our budget for ads should be around 83.3 euros. And if we wanted to have 1000 users, then our marketing budget should be around 830 euros.

So, in less than 2 days (during the Innovation Labs) we launched a simple one-page website and collected valuable insights about the idea’s potential.

Lean is an effective methodology for reducing and eliminating waste and a great tool for learning. The one-button test, where you are just checking if users are interested in your product, has the added benefit that it can be developed really fast and that you can gather the results in just a few days. No more time and energy wasted on a product that nobody wants or needs.

If you want to find out more about the powerful problem-solving Lean methodology and how you can save time and energy, and get rid of waste, then I highly recommend you Eric Ries’s book, The Lean Startup.

Do you have an idea that needs a website or a mobile app? Or do you just need help with your software project? Cegeka can help you. Our family-founded company with roots in Belgium has over 4.600 experts around Europe than can help you with the most challenging projects. Just drop us an email at ro@cegeka.com and let’s create useful software!

What is a Foundation Phase? What are the advantages? Find out more from Andrei Pavel, Director of Engineering.

In this episode, our guest is Andrei Petreanu Tech - Lead,  Machine - Learning, Research - Engineer and lecturer at the Polytechnic University of Bucharest.

Cegeka Podcast: How a value driven organization can provide growth.

In this episode of Cegeka Podcast we listen to a speech held by Fady Chreih, CEO of the largest private healthcare network in Romania "Regina Maria".