How to transform a classic company into an agile organization

In four years, the IT department of the RSVZ (the government body that handles social security for the self-employed) doubled in size. But the implementation of new laws into a high-performing application still remained a real challenge. A few missed deadlines later, Jo Verspeet, the IT director, decided to act. An agile coaching path initiated the transformation in 2017. ‘Now something that never happened before has become normal – our applications are sometimes even ready too soon.’

Jo Verspeet’s team currently includes 140 IT professionals, divided across different teams and applications, each with a considerable amount of responsibility and autonomy. The administrator-general, i.e. the big boss, is also arguing the agile case with enthusiasm. Jo takes on the role of inspirer, and a newly hired agile coach will ensure the final fusion of business and IT.

In summary, in 2018 the RSVZ’s IT department works as a modern, self-learning organization that is constantly fine-tuning itself. The cooperation with Cegeka, more specifically with agile coaches Tom Hendricks and Thibaut Smets, proved to be the right decision. 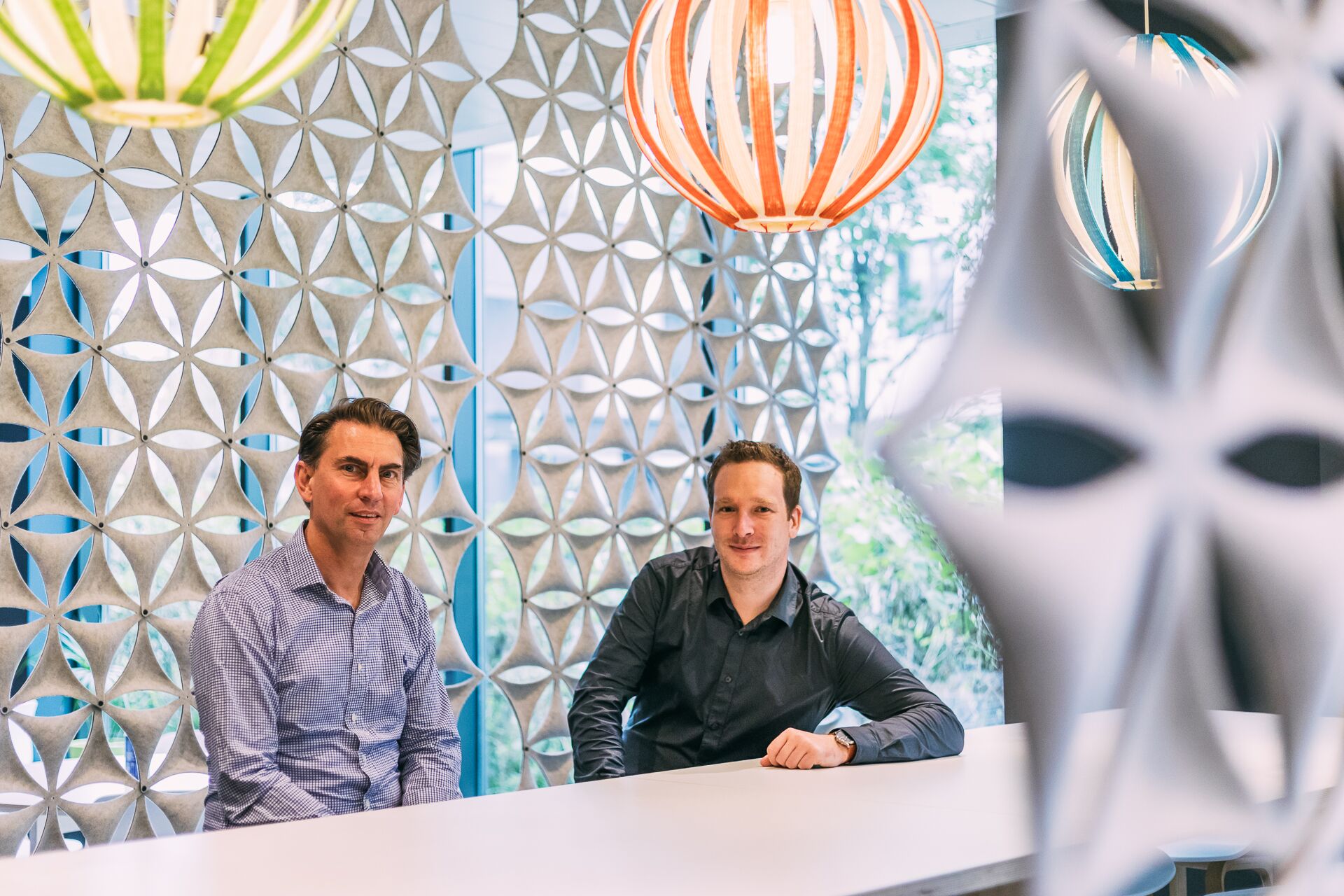 Agile: what’s in a name?

A way to develop better products faster. A set of IT best practices to achieve business objectives. A way to create more value with less work. If you ask 100 IT professionals for a definition of agile, you will get the same number of answers.

‘It’s an attitude,’ Jo says. The IT director opts for a broad definition. This is not a coincidence, as the culture within his team has changed drastically over the past few years. ‘We have evolved from a traditional, quite conservative hierarchy to a self-learning and open organization. This is not only about communication and processes, but also about the layout of our offices. We have also broken down a lot of physical walls between business and IT people.’

Tom agrees with Jo’s definition. ‘In the broadest sense, agile is about a culture of learning and experimentation.’ There is no standard procedure to get there. Each organization has such different culture and processes that an agile implementation is also always a question of testing and fine-tuning. So agile is a kind of meta-story. And this flexibility is the added value of coaching.'

‘An agile implementation is a meta-process: you can only anchor a culture of learning and experimentation by trying different things and fine-tuning them as you go’ 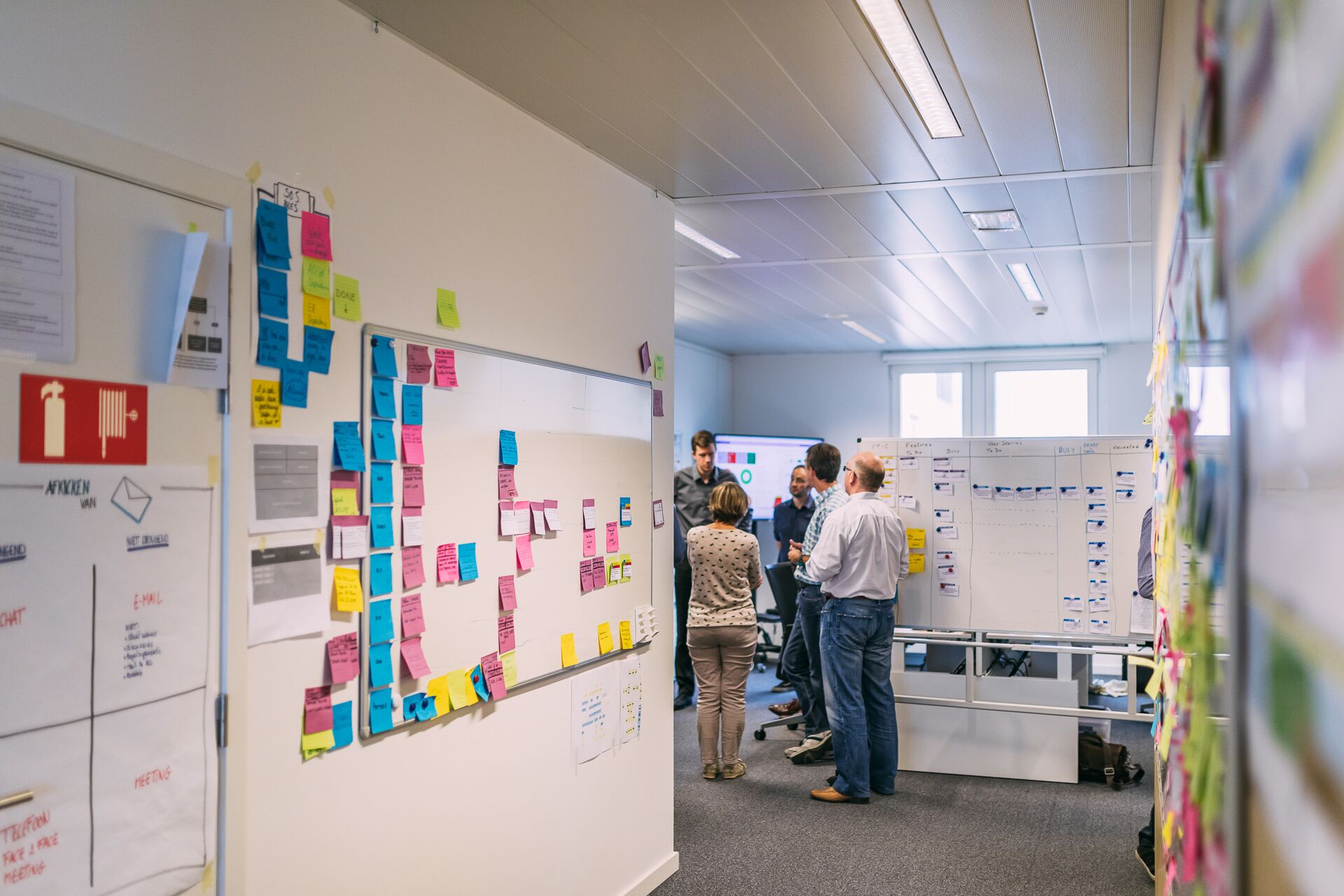 From theory to real-life example

No standard approach, nothing done by the book – that’s the common theme in Jo and his team’s story. Still, the initial challenges were exactly the same as for traditional IT departments. ‘Everyone was doing several projects at the same time. As yet there were no multidisciplinary teams. This had typical consequences for new software: half a year of analysis, another half year of development, which resulted in an expensive and unfit application.’

Jo and the top management of the RSVZ visited the Cegeka Software Factory, and this got the ball rolling. ‘Our visit was an eye-opener. For me it was important that agile would be introduced in a step-by-step manner. I knew that a rushed project would scare many people away. Anne Vanderstappen, our administrator-general and a big fan of agile, gave us her trust. In the meantime we knew more or less where we were heading. And we knew the theory, but not how it worked in practice. So we needed a coach.’

They found their coaches in Tom and Thibaut. Yet the organization remained careful. The RSVZ didn’t want a big-bang approach. ‘We were no blind believers. Tom and Thibaut had to help us, and show us what worked and what didn’t,’ Jo says. They immediately identified the same issues as Jo. ‘But apart from the backlog in applications, we also noticed a huge concentration of knowledge in certain people. This meant knowledge sharing had to be an important element in a coaching path.’ 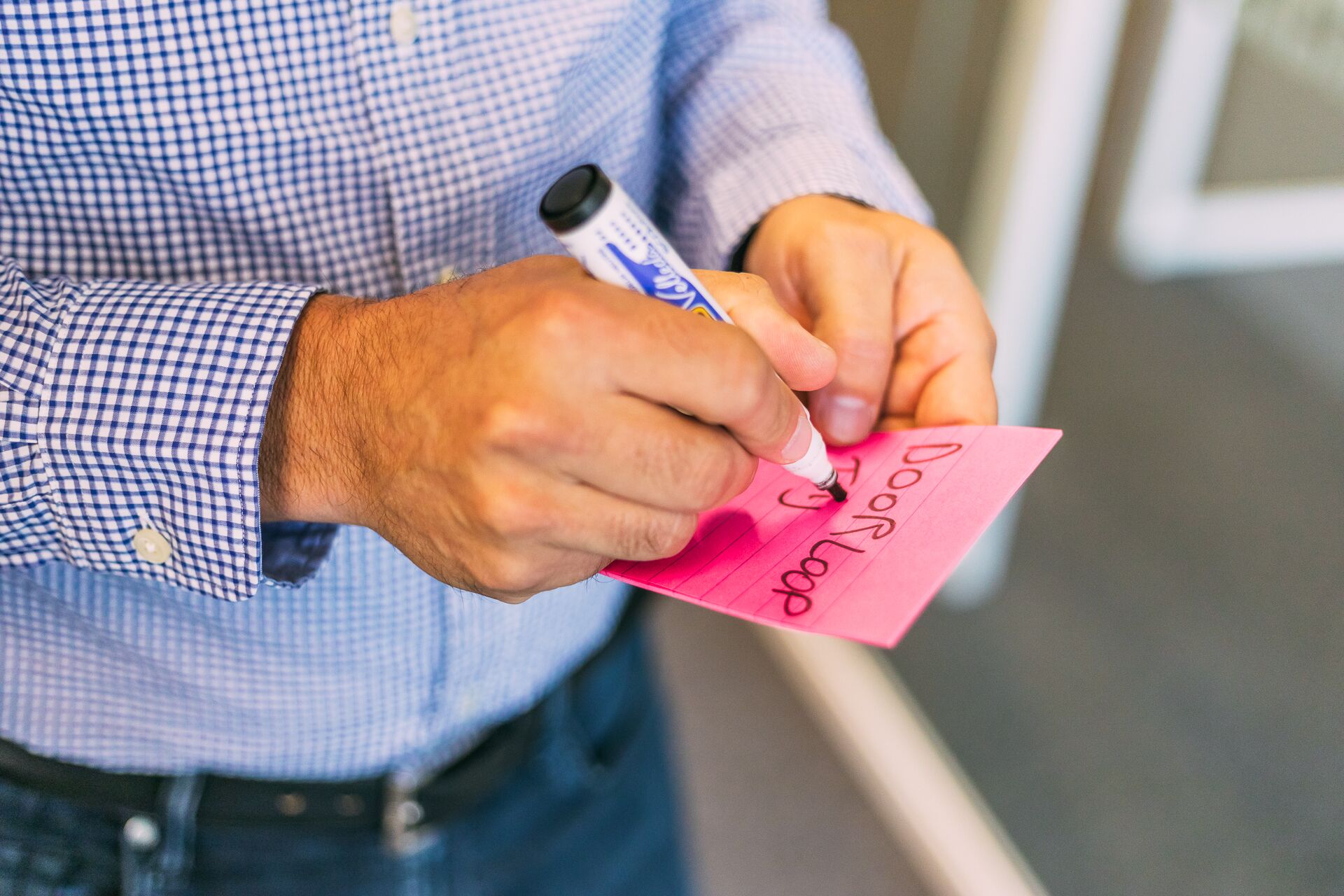 The RSVZ’s pension departments kicked off the project as the pilot group. Analysts, developers, testers, a scrum master and a product owner were brought together. As Jo explains, ‘It was a logical choice, because the team was already quite mature, and a new, clearly-defined project had been prepared. Still, there were some cold feet. This is understandable, because they were the first to get started. In addition, the stakes were high, because the business had high expectations. The new application had to offer much better performance than the previous one.’

At the start, Tom went on site for a few days as a coach. ‘It’s important that the first training sessions don’t take too much time and are not too theoretical. I prefer to start with practice’, Tom explains. ‘After a few days, we already started making specific arrangements for our cooperation. We soon had our first visualized canvases. It was also helpful that the product owner’s office was just around the corner. During the later stages of the project, we brought the teams together physically as often as possible.’

‘It’s best to keep the first workshops short and concrete, and start with practice as soon as possible. The result of a first sprint can help to general internal enthusiasm’

IT as a people business

Jo and Tom are used to some resistance during an agile project. Jo explains: ‘There is always some uneasiness. People have to get out of their comfort zones. You can’t force them to do that. There are always a few employees who don’t adopt changes as fast as other people. A classic line I’ve heard a few times is: “Agile works everywhere, except here."

The human factor is essential to agile, that’s clear. As Tom says it: ‘You can’t force people into it. If a project requires too much force, the approach will collapse soon after the coaching.’ In other words, ‘IT is more of a people business than a technical business. If projects go wrong, it’s not because we aren’t smart enough. It’s because we don’t manage to get the right team to work together towards the same goal.’

‘IT is a people business. If projects go wrong, it’s mainly because we don’t manage to get the right team to work together towards the same goal’ 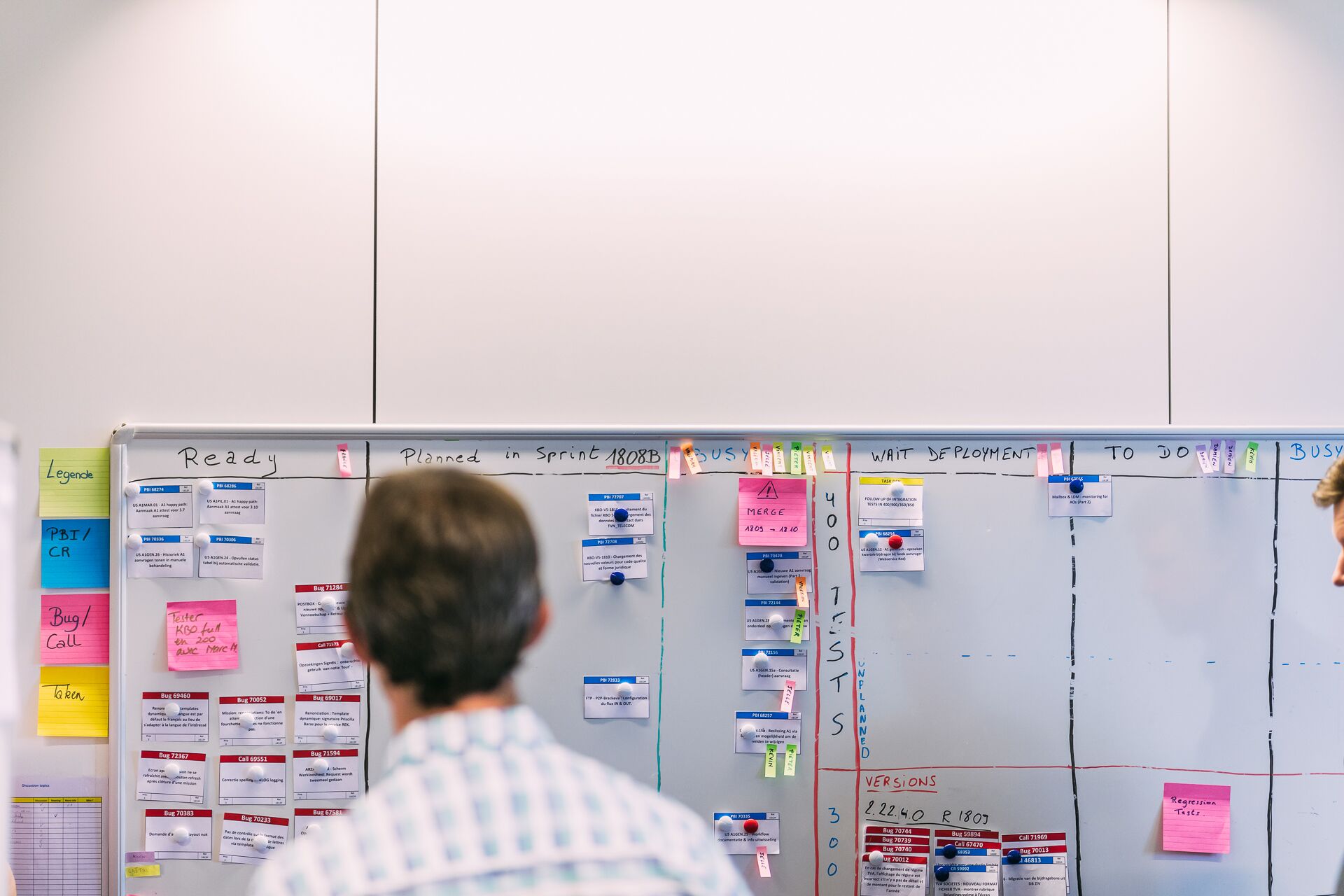 Pride as a success factor

Mid-2018, the objectives have been met, and exceeded. In certain areas, the lead time has decreased ninefold. The speed of bug resolution has also improved drastically. Jo’s constant focus on quality is an important factor here: ‘SIG, the Software Improvement Group, a company from Amsterdam, allowed us to measure the quality of our software. It wasn’t good initially, which was logical, because we were doing too many things at the same time. We’ve installed a product in which developers enter their code, and receive a score. Now we have to deliver good software.’

‘The possibility of receiving instant feedback and making your work visible internally has improved the quality a lot,’ Tom adds. ‘This has much to do with personal pride. Again, agile starts from people’s intrinsic motivation. The desire to learn continuously.’ Jo nods and adds: ‘But without going too fast.’

But this long-term process can certainly still be built upon. ‘Cooperation between the teams can improve,’ Jo states. ‘And now there is still a fixed team for each domain. In the longer term, we simply have to be able to deploy the right people, irrespective of the domain of their previous project. This way people learn and stay sharp.’ There’s still a lot of work to do, but not for Tom and Thibaut. They have accomplished their mission. ‘The coaching has been internalized, so we’ve become redundant. And that’s how it’s supposed to be.’

Agile transformation: the goals that make it last

On the eve of 2020, the world is in full expansion. We want things to be faster, better and more personalized. All over the globe, companies are looking for ways to be successful in the face of increasing demand-driven complexity. Many of them turn to agile transformation processes to make their businesses more futureproof. But are those really the key to victory?

In our ever-faster changing digital world, flexibility is a crucial differentiating factor. Agility can be the answer, but where to start?